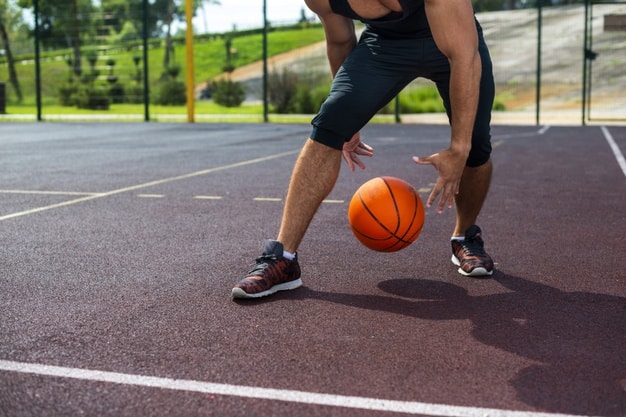 Do you want to bolt past a defender in the court and get to the rim with ease that you create a fantastic shot for yourself and your team?

Do you have a strong desire to fly past your opponent and score that winning goal?

Many people believe they need complex moves to be a great ball-handler; that could be true to some extent, but a few tricks, the right court and comfortable sport shoes that can accommodate your weight can get you to where you want to be in no time.

Don’t complicate anything instead keep your moves simple and effective using the skills highlighted below:

The first trick to grasp before any other is how to locate your destination; the aim here being the rim or the basket where you need to push in the ball after dashing across the court past your opponent(s). To improve your shooting skills, create a habit of locating the rim earlier on to give your brain time to calculate the distance, and focus on your main goal.

Always have your eyes on the rim as soon as possible and keep this habit in practice until it comes naturally and carries over into all the other games you take part.

Though the spin move is one of the hardest tricks to master, it is by far the greatest weapon you can have inside the court.

Add this move to your dribbling prowess, and you will be way ahead of the rest.

To perfect this move when facing an opponent, plant your inside foot forward and reverse around a defender with hand on top of the ball; if your hand slips under the ball, the referee might blow the violation whistle on you.

It is a quick and effective way to dribble past your opponent.

There are different types of basketball dribbles, and the crossover dribble is one of the most common one. It is ankle-breaker and is used by players at all levels to go past an opponent. Crossover is often the first trick that most players grasp when they learn how to dribble. Quickly dribble the ball from one side of your body to the other to confuse your opponent on which direction you will be taking.

You can then cross them over and leave them stumbling in the wrong direction as you take off unopposed towards the basket.

Oscar Robertson first perfected this move in the early 1960s while Dwayne Washington used it a lot while playing for Syracuse in the 1980s.

In and Out Dribble

This trick is used to misdirect your opponent into thinking that you are about to perform a crossover, hence known as a ‘fake crossover.’

Place your right hand on the side of the ball and push it across your body without letting your hand go under the ball.

The secret to performing this trick successfully is by using your head, eyes, and left leg.

As you bring the ball across your body from your right hand, take a step with your left foot, turn your head to your left and make it look like you are about to make a turn then switch direction immediately and dash past your opponent.

When your opponent realizes you have slowed down, they will do the same to keep the momentum only for you to explode past them to the rim or create a shot for your teammate.

Look up the rim, look at your teammate, look at your defender, or combine all the three to fool the defender before you shoot your shot and leave everyone impressed at your brilliance.

Playing basketball is a form of exercise. It’s just like using a treadmill, only this time you get to enjoy the game.

If you follow the tricks above, you can quickly light up the court during a game and leave everyone’s mouth agape and talking about you for hours after the game.

Just learn a few tricks, get a good portable basketball hoop for dunking, dribble the ball, spin, and sometimes fake a pass to dazzle your opponents.

Timing and coordination make a perfect combination for effective dribbles and passes to a teammate. Above all else, keep practicing, as that is the key to perfection!

As an Amazon Associate I earn from qualifying purchases.